Written by Jessica Johnson on 03 November 2016. 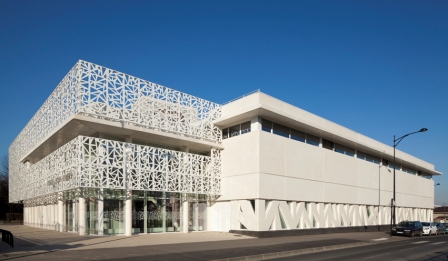 The Jessie-Owens Gymnasium is a sport centre and a meeting point at the same time for the children and teenagers where they can get together and have fun.

The facade of the building is composed of acid etched white precast concrete panels and lacquered aluminium. The choice of white colour contributes to a sustainable, reduced energy consumption of the building and reduces the island effect in the urban area.

It is situated on the periphery of a small town and it offers an alternative to neighbouring semi-detached houses. Its oriental inspired façade is characterized by a concrete net imitating the Moroccan moucharabieh playing with light and shadow.

Although it is situated at an urban environment, the building makes reference to nature by creating a “fifth facade”, since it has a green roof. Furthermore, the perforated and transparent pattern of the concrete base reminds the viewer to the roots of trees growing from the ground.