Written by Jessica Johnson on 18 November 2015. 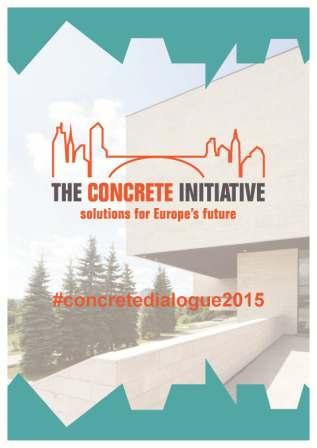 Brussels, 19 November 2015: A newly released study by La Bipe (Euroconstruct) management consultants, has documented that for every job created in cement and concrete within the construction industry, nearly three jobs (2.8) are created in the wider economy. The report’s findings were revealed at a high level conference hosted by The Concrete Initiative today in Brussels. The conference brought together European and local policymakers and other interested stakeholders to discuss the economic, social and environmental benefits of sustainable construction for Europe’s citizens.

Commenting on the report’s findings, Daniel Gauthier, President of CEMBUREAU, a leading member organisation of The Concrete Initiative said:  “The cement and concrete industry adds €56 billion to the European economy and provides jobs for more than a million people”. Mr Gauthier continued: “Industry calls on the European Commission and the EU Member States to use the European Fund for Strategic Investment (EFSI) to promote infrastructure and sustainable construction projects to help create a better built environment for Europe’s citizens in the future and drive Europe’s economic recovery.”

The Le Bipe study also highlighted the key sectors where cement and concrete are used which in turn contribute to Europe’s low carbon economy. These include energy efficiency, transport infrastructure and sustainable construction.

A further study from the European Commission’s Joint Research Centre, discussed at the conference, highlighted key components that make for sustainable construction, in particular the need to design and assess buildings taking all aspects such as cost, safety and environment into account. “With the European Commission’s proposals on the circular economy expected to be released shortly, and in the context of the international climate change talks in Paris, it is important that cement, concrete and construction’s efforts to contribute to Europe’s low carbon economy are recognised”  concluded Koen Coppenholle, CEMBUREAU Chief Executive

About us
The Concrete Initiative gathers together the cement and concrete sectors.  It is composed of CEMBUREAU (the European Cement Association) BIBM (the European Federation of Precast Concrete), ERMCO (the European Ready-Mixed Concrete Organization) and UEPG (the European Aggregates Association). Its aim is to engage with stakeholders on the issue of sustainable construction, from a concrete perspective.

For more information contact: Jessica Johnson, Communications Director, The Concrete Initiative
Tel: + 32 2 234 1045 - Email: This email address is being protected from spambots. You need JavaScript enabled to view it.

Publications: Cement and Concrete Industry: Multiplier Effect on the Economy and their Contribution to a Low Carbon Economy (Le Bipe) -  Building Design for Safety and Sustainability (JRC)