Cement and Concrete Industry: Multiplier Effect on the Economy and their Contribution to a Low Carbon Economy

Written by Jessica Johnson on 23 November 2015. 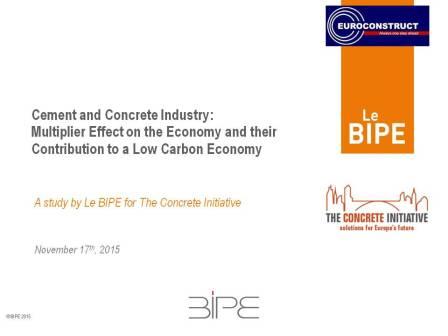 On 19 November, The Concrete Initiative launched the results of a study by consulting group Le Bipe, focusing on the multiplier effect of the cement and concrete industry on Europe's economy.  The study clearly concludes that this inportant industry contributes to local growth and jobs in a low carbon economy.  in fact, for every € generated in this sector, €2.8 are generated elsewhere in the economy. Here you will find a brief summary of the results of this study as well as adirect link to the study itself.
A strong contribution to the European economy:
An essential material in the low carbon economy
The full study can be downloaded from here