Affordable housing – a pipedream, or a future reality? 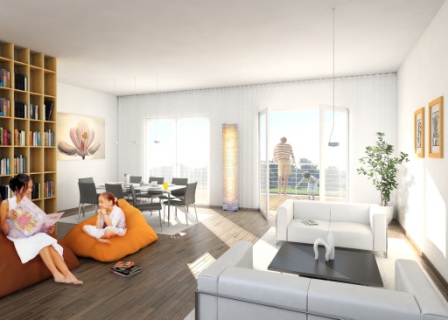 According to Habitat for Humanity’s 2015 Housing Review1, the cost of housing places a heavy burden on over 10% of European households.  Of this 10%, more than 39% of families are also at risk of poverty. This is further backed by Eurostat figures which note that nearly 10% of EU citizens live in severe “material deprivation” – in new Member States this figure is almost double (18.6%). And it seems that the situation is not improving.

The result of this lack of affordable housing is that an ever increasing number of people end up in overcrowded living conditions: across the EU 28, 17% of the population lives in overcrowded housing, ranging from 1.6% in Belgium to 51.6% in Romania (2012 figures).  More and more young adults (18-34) struggle to move out into a home of their own: 55% of young adults in Portugal are still living with their parents, with this figure rising to 74% in Slovenia.

Stockholm, for example, could be about to enter the Guinness Book of World Records2, and not for the right reasons… There is a nine year waiting list for access to rent-controlled property – doubling to almost 20 years for more popular neighborhoods.  This pressure is due to several factors, including a high birth rate and record immigration, making Stockholm Europe’s fastest growing capital. But as the BBC reports, the lack of investment in sufficient homes for long-term residents (let alone the latest arrivals), is also clearly taking its toll.

The issue of affordability does not just stop here.  Other household expenditure, particularly gas and electricity bills, can also take a serious bite out of a family’s income.  Much of current legislation focuses on the environmental benefits of becoming more energy efficient. But surely an equally important plus to building energy efficient home is the fact that it will reduce the financial burden on families!  After all, in many Members States peoples’ gas and electricity bills have a risen due to a combination of wholesale prices and increases in taxes and subsidies. And this is having a significant impact on people. Back in 20133, EU figures highlighted that, on average, 11% of people across the EU struggled to heat their homes during cold winters months, ranging from 6.5% in the UK to nearly 50% in Bulgaria.

So what is the solution?  A simplistic view would be to say build more - energy efficient - homes. The challenge is much greater than this.  Yes, we do need more housing - but how should it be built, and who is going to pay for it? Will it be sustainable enough, whilst meeting the needs of modern society? Who should take the lead, and who needs to be involved?

For me, the solution lies in dialogue -  a dialogue that brings together organizations who can outline what the problems are, the construction industry which can work together to find solutions, banks offering an insight into potential financial support, and policymakers who can put in place the necessary framework to make it all happen. I, for one, will be keeping a close eye on this – after all, we all have the right to an affordable home.